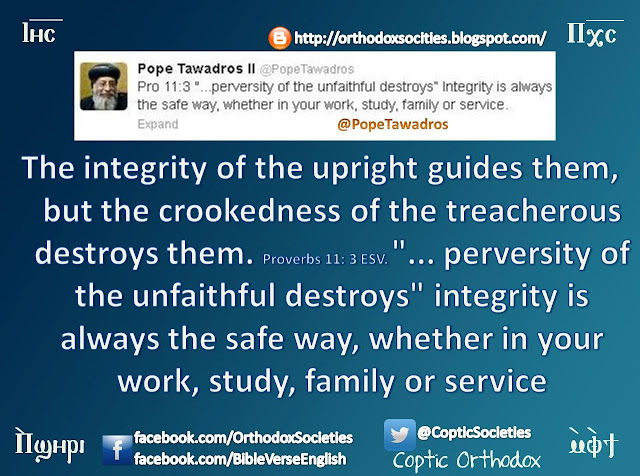 The integrity of the upright guides them, but the crookedness of the treacherous destroys them. Proverbs 11: 3 ESV. "... perversity of the unfaithful destroys" integrity is always the safe way, whether in your work, study, family or service

Posted by Coptic Societies at 1:53 PM No comments: Links to this post

A Baptism of Humility 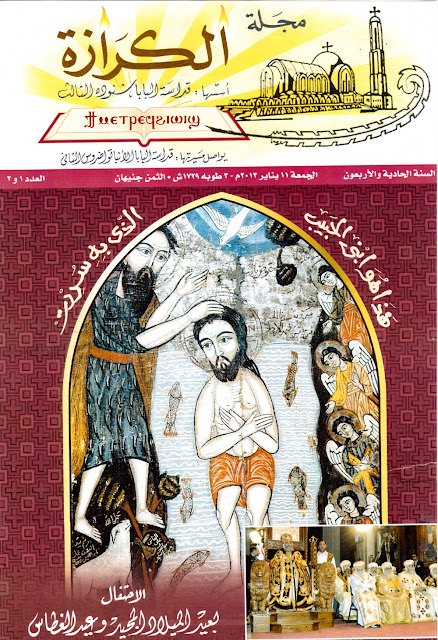 A Baptism of Humility

The One who is without sin, carried sin for our sake. He did not feel ashamed to walk forward with the sinners and ask His servant, John, to baptise Him. When the great prophet became embarrassed of the situation, He gently said to him, “Permit it to be so now, for thus it is fitting for us to fulfill all righteousness.” Matthew 3: 15 NKJV

By doing this, He gave us a practical lesson, to carry the sins of others. To happily pay the price on their behalf, not to justify ourselves, on matter how innocent we are. And in this way, we fulfil all righteousness

Saint John Chrysostom said, “If you are unable to carry the sins of others and relate them to yourself, try at least not to judge another, and let him carry your sins...”

If we fail to carry the sins of others, try at least to endure their failings towards us and forgive them. In this manner, we become like Christ, and become worthy of being called sons of God 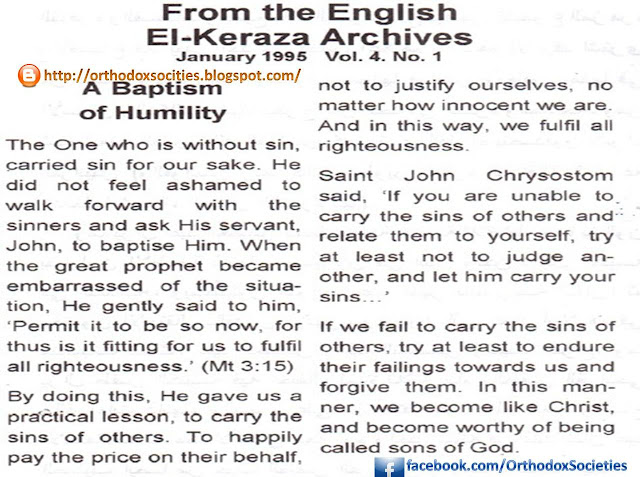 Touba Ⲧⲱⲃⲓ (Tobi, Toubah), is the fifth month of the Coptic calendar. Tobi is also the first month of the Season of 'Proyet' (Growth and Emergence) in Ancient Egypt, where the Nile floods recede and the crops start to grow throughout the land of Egypt.

The name of the month of Tobi comes from Amso Khem, a form of the Ancient Egyptian God Amun Ra

Posted by Coptic Societies at 12:51 PM No comments: Links to this post

How The Spirit of The Lord Moves 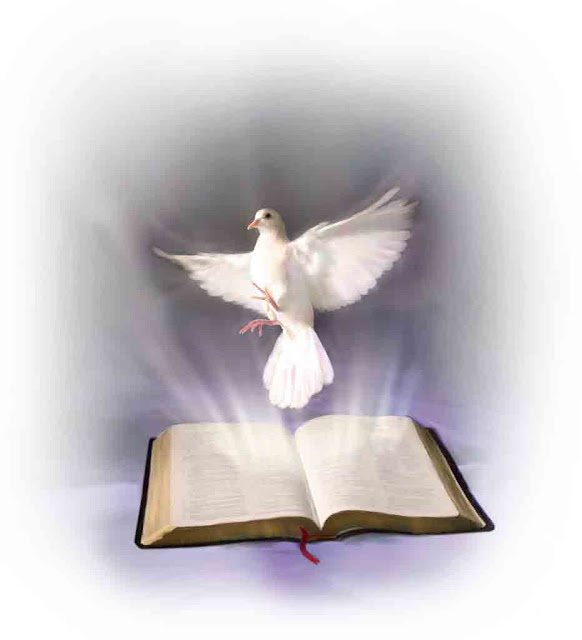 How The Spirit of The Lord Moves

A missionary on furlough told this story while visiting his home church.

“While serving at a small field hospital in Africa, every two weeks I traveled by bicycle through the jungle to a nearby city for supplies.
This was a journey of two days and required camping overnight at the halfway point. On one of these journeys, I arrived in the city where I planned to collect money from a bank, purchase medicine and supplies, and then begin my two-day journey back to the field hospital.

Upon arrival in the city, I observed two men fighting, one of whom had been seriously injured. I treated him for his injuries and at the same time talked to him about the Lord Jesus Christ.

I then traveled two days, camping overnight, and arrived home without incident. Two weeks later I repeated my journey.

Upon arriving in the city, I was approached by the young man I had treated and he told me that he had known I carried money and medicines. He said, “Some friends and I followed you into the jungle, knowing you would camp overnight.

We planned to kill you and take your money and drugs. But just as we were about to move into your camp, we saw that you were surrounded by 26 armed guards.’”

At this I laughed and said that I was certainly all alone out in that jungle campsite. The young man pressed the point, however, and said, ‘No sir, I was not the only person to see the guards. My five friends also saw them, and we all counted them. It was because of those guards that we were afraid and left you alone.‘ At this point in the sermon, one of the men in the congregation jumped to his feet and interrupted the missionary and asked if he could tell him the exact day this happened. The missionary told the congregation the date, and the man who interrupted told him this story:

“On the night of your incident in Africa, it was morning here and I was preparing to go play golf. I was about to putt when I felt the urge to pray for you. In fact, the urging of the Lord was so strong, I called men in this church to meet with me here in the sanctuary to pray for you. Would all of those men who met with me on that day stand up?” The men who had met together to pray that day stood up. The missionary wasn’t concerned with who they were, he was too busy counting how many men he saw. There were 26.”

This story is an incredible example of how the Spirit of the Lord moves in mysterious ways. If you ever hear such prodding, go along with it. Nothing is ever hurt by prayer except the gates of hell.

Posted by Unknown at 6:06 PM No comments: Links to this post

Let not the wave master you in this troubled state of your heart. Yet since we are but men, if the wind should drive us on, and stir up the affections of our souls, let us not despair; let us awake Christ, that we may sail on a tranquil sea, and so come to our country.

Posted by Unknown at 5:22 PM No comments: Links to this post

Email ThisBlogThis!Share to TwitterShare to FacebookShare to Pinterest
Labels: Do not Despair, Fathers Sayings, Let Not, May Sail, Souls, ST. Augustine, Troubled heart 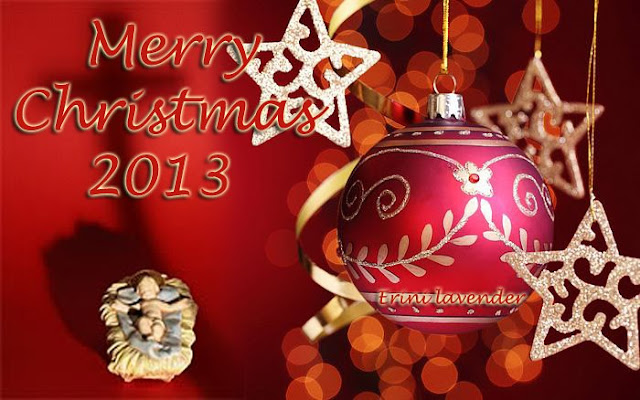 Lord, make it a blessed year... A pure year to please You... A year in which Your Spirit prevails... And joins in working with us... Hold our hands and guide our thoughts from the beginning of the year till its end... Let this year be Yours, to please You...

It is a New Year, spotless; let us not tarnish it with our sins or impurities...

Lord, be with us in every work we intend to do this year... Silent we will be, and you will do everything... Let us rejoice in all Your deeds, and say with John the Evangelist:

"All things were made through Him, and without Him nothing was made that was made." (John 1: 3) Let this year, 0 Lord, be a happy year... put a smile on each face and gladden every heart... Let Your grace emerge in our trials and help those who are tempted...

Grant us peace and quietness of mind... Give those who are in need, cure the sick and console the grieved...

We do not ask You, God, only for ourselves... But we ask for the all, because they are Yours...

You created them to rejoice in You... then make them happy with You...

We ask You for the Church, for Your mission, that Your word may reach every heart... We ask you for our country, for the world's peace that Your Kingdom may come everywhere.

Let it be a fruitful year, full of goodness... Every day and every hour has its own work...

Do not allow a futile moment... Fill our life with activity, work, and production...

Grant us the blessing of a productive and holy toil. Let the communion of the Holy Spirit be with us in all our deeds...

We thank you, God, for you have kept us till this hour and granted us this year, that we may bless You...

Posted by Coptic Societies at 7:47 PM No comments: Links to this post 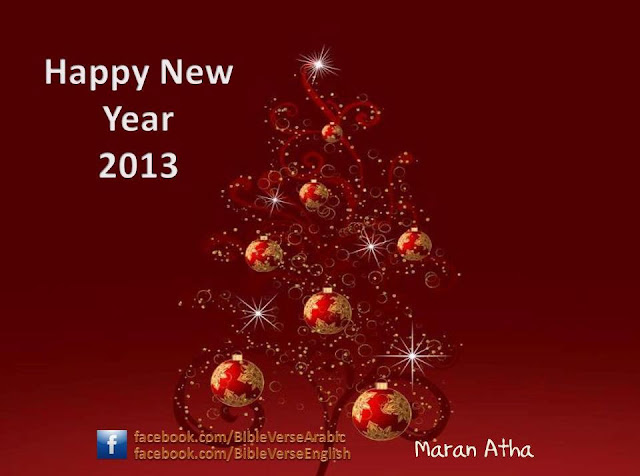 You crown the year with Your goodness,
And Your paths drip with abundance.
Psalms 65:11


O Lord, strengthen me. Lead each day of this  new year.
Take over my life, shape it in a way according to Your plan and Your Holy Will.
Reveal Your own will in my life, "Show me Your ways, O Lord Teach me Your paths"
(Psalm 25:4)

Posted by Unknown at 6:16 PM No comments: Links to this post