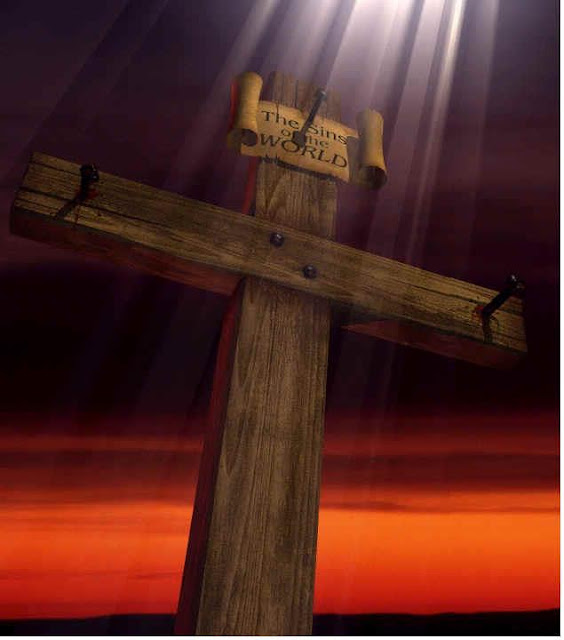 For the message of the cross is foolishness
to those who are perishing,
but to us who are being saved
it is the power of God.

Posted by Unknown at 6:44 PM No comments: Links to this post 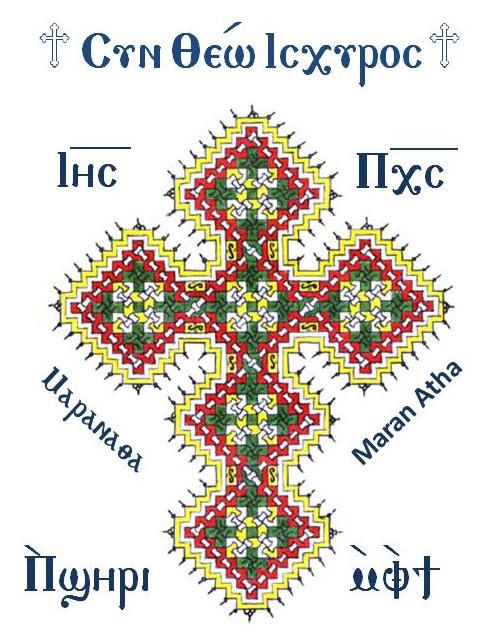 Wherever the soul of man turns, unless it turns to you it clasps sorrow to its heart.  Even if it clings to what is lovely, if this loveliness is outside God, it has clung to sorrow, for these beautiful things would not exist without you.  Like the sun, they rise and set: they have their beginning and then they grow old and die.

Let me praise you for these things, my God who made them all, but do not let the love of them be like glue to fix them to my soul.

In these things there is nowhere to rest, because they do not last, they pass away beyond the reach of our senses.  Indeed we cannot lay firm hold on them even when they are with us.

In this world one thing passes away, and another takes its place. But does the Word of God pass away? Make your dwelling in him.  Entrust to him whatever you have, for all you possess is from him.  In him is the peace that cannot be disturbed, and he will not withhold himself from your love if you do not withhold your love from him.

Posted by Unknown at 3:17 AM No comments: Links to this post

Email ThisBlogThis!Share to TwitterShare to FacebookShare to Pinterest
Labels: Cling To God, Daily Readings, Don't Cling To Sorrow, Dwell in Him, Everlasting Love, Nowhere To Rest, Peace, Praise The LORD, Soul of Man, St Augustine, The Heart at Rest, Trust In Him, Word of God 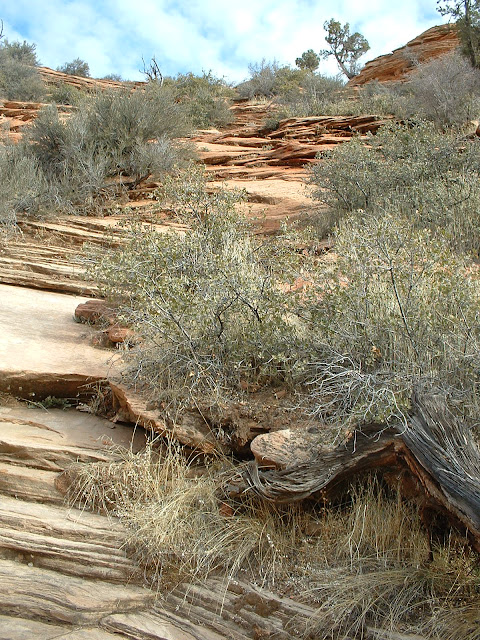 Getting Started
A RESOLUTE AND SUSTAINED PURPOSE
IF you wish to save your soul and win eternal life, arise from your lethargy, make the sign of the Cross and say:
In the name of the Father, and of the Son and of the Holy Ghost. Amen.
Faith comes not through pondering but through action. Not words and speculation but experience teaches us what God is. To let in fresh air we have to open a window; to get tanned we must go out into the sunshine. Achieving faith is no different; we never reach a goal by just sitting in comfort and waiting, say the holy Fathers. Let the Prodigal Son be our example. He arose and came (Luke15:20).

However weighed down and entangled in earthly fetters you may be, it can never be too late. Not without reason is it written that Abraham was seventy-five when he set forth, and the labourer who comes in the eleventh hour gets the same wages as the one who comes in the first. Nor can it be too early. A forest fire cannot be put out too soon; would you see your soul ravaged and charred?
In baptism you received the command to wage the invisible warfare against the enemies of your soul; take it up now. Long enough have you dallied; sunk in indifference and laziness you have let much valuable time go to waste. Therefore you must begin again from the beginning; for you have let the purity you received in baptism be sullied in dire fashion.
Arise, then; but do so at once, without delay. Do not defer your purpose till "tonight" or "tomorrow" or "later, when I have finished what I have to do just now."  The interval may be fatal. No, this moment, the instant you make your resolution, you will show by your action that you have taken leave of your old self and have now begun a new life, with a new destination and a new way of living.  Arise, therefore, without fear and say: Lord, let me begin now.  Help me! For what you need above all is God's help.
Hold fast to your purpose and do your purpose and do not look back.  We have been given a warning example in Lot's wife, who was turned into a pillar of salt when she looked back (Genesis 19:26).  You have cast off your old humanity let the rags lie. Like Abraham you have heard the voice of the Lord: "Get thee out of the country, and from thy kindred, and from thy father's house, into a land that I will show thee" (Genesis 12:1).  Towards that land hereafter you must direct all your attention.
~ Tito Colliander's The Way of the Ascetics.

Posted by Unknown at 5:12 PM No comments: Links to this post 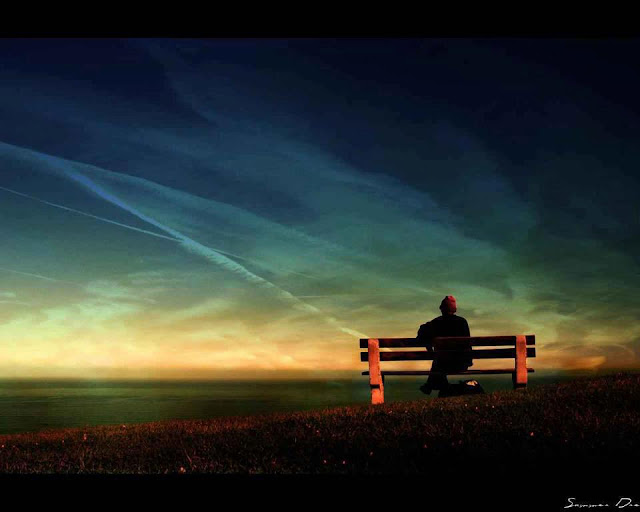 "And you will seek Me and find Me, when you search for Me with all your heart."
Jeremiah 29:13

If we seek God, He will show Himself to us, and if we keep Him, He will remain close to us."
Abba Arsenius.

Posted by Unknown at 4:52 PM No comments: Links to this post

Submit Your Ways To The Lord 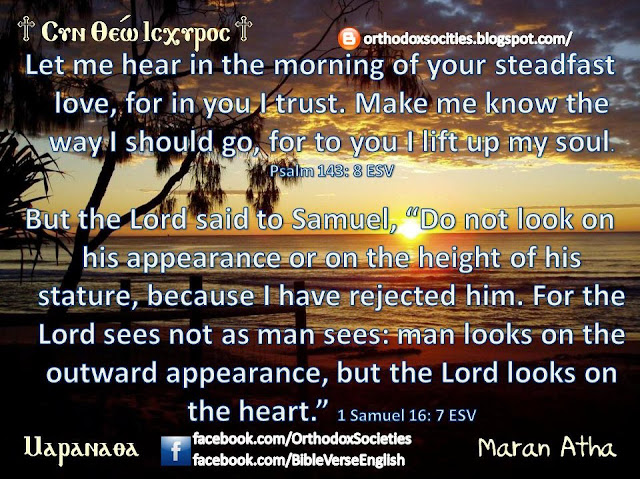 Teach me your way, LORD, that I may rely on your faithfulness; give me an undivided heart, that I may fear your name.
Psalm 86: 11 NIV
Everyone has an outer life and an inner life. The outer life is our public life that people can see. The inner life is made up of your thoughts, attitudes and motives. Only you and God know what’s going on inside. Too many people go around today pretending — acting one way, yet on the inside, they’re thinking something totally different. Their heart and their actions don’t line up.
We have to understand that God looks at the inside. We can fool a lot of people, but God knows everything . God would rather us be open and honest than for us to go through life pretending or wearing masks. Today, take inventory of what’s going on inside of you. Are you at peace? Are you overlooking offences? Do you believe the best in people? Are your heart and actions lining up? If not, submit your ways to the Lord today and ask Him to give you an undivided heart. Live a life pleasing to Him and walk in His blessing all the days of your life!

Email ThisBlogThis!Share to TwitterShare to FacebookShare to Pinterest
Labels: Be Blessed, Be Peaceful, Fake life, Fear His Name, Fooling God, God Is Honest, Please God, Pretending, Submit To The Lord, Teach Me 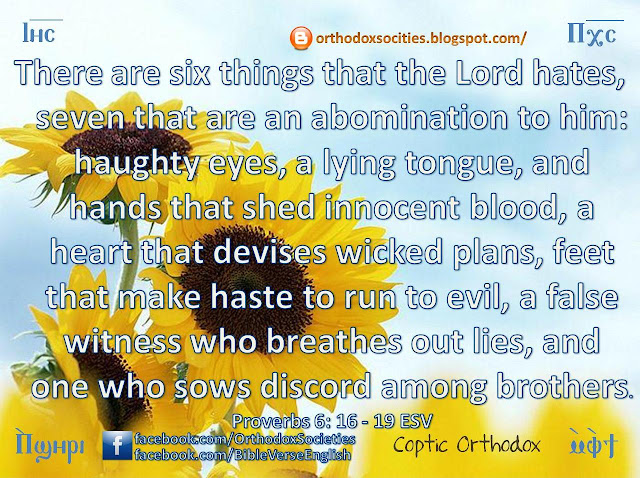 There are six things that the Lord hates, seven that are an abomination to him: haughty eyes, a lying tongue, and hands that shed innocent blood, a heart that devises wicked plans, feet that make haste to run to evil, a false witness who breathes out lies, and one who sows discord among brothers. Proverbs 6: 16 - 19 ESV 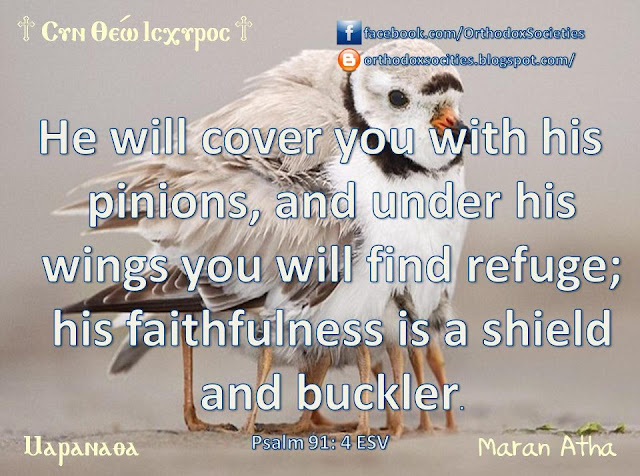 After a forest fire in Yellowstone National Park, forest rangers began their trek up a mountain to assess the inferno’s damage.

One ranger found a bird literally petrified in ashes, perched statuesquely on the ground at the base of a tree. Somewhat sickened by the eerie sight, he knocked over the bird with a stick. When he struck it, three tiny chicks scurried from under their dead mother’s wings.

The loving mother, keenly aware of impending disaster, had carried her offspring to the base of the tree and had gathered them under her wings, instinctively knowing that the toxic smoke would rise. She could have flown to safety but had refused to abandon her babies. When the blaze had arrived and the heat had scorched her small body, the mother had remained steadfast. Because she had been willing to die, those under the cover of her wings would live…

“He will cover you with his pinions,  and under his wings you will find refuge;  …” Psalm 91:4

1 - He who dwells in the shelter of the Most High  will abide in the shadow of the Almighty.

3 - For he will deliver you from the snare of the fowler  and from the deadly pestilence.

4 - He will cover you with his pinions,  and under his wings you will find refuge;   his faithfulness is a shield and buckler.

5 - You will not fear the terror of the night, nor the arrow that flies by day,

6 - nor the pestilence that stalks in darkness,  nor the destruction that wastes at noonday.

7 - A thousand may fall at your side,  ten thousand at your right hand,  but it will not come near you.

8 - You will only look with your eyes  and see the recompense of the wicked.

9 - Because you have made the Lord your dwelling place—  the Most High, who is my refuge —

10 - no evil shall be allowed to befall you,  no plague come near your tent.

11 - For he will command his angels concerning you  to guard you in all your ways.

12 -  On their hands they will bear you up,  lest you strike your foot against a stone.

14 - “Because he holds fast to me in love, I will deliver him;  I will protect him, because he knows my name.

15 - When he calls to me, I will answer him;  I will be with him in trouble;  I will rescue him and honor him.

16 - With long life I will satisfy him  and show him my salvation.”

Posted by Unknown at 6:08 PM No comments: Links to this post

Email ThisBlogThis!Share to TwitterShare to FacebookShare to Pinterest
Labels: A Bird, Blaze, Dead Mother, Did Not Abandon Her Babies, He Will Cover You, In Ashes, Loving Mother, National Geographic, Steadfast, Willing To Die, Wings, You Will Find Refuge 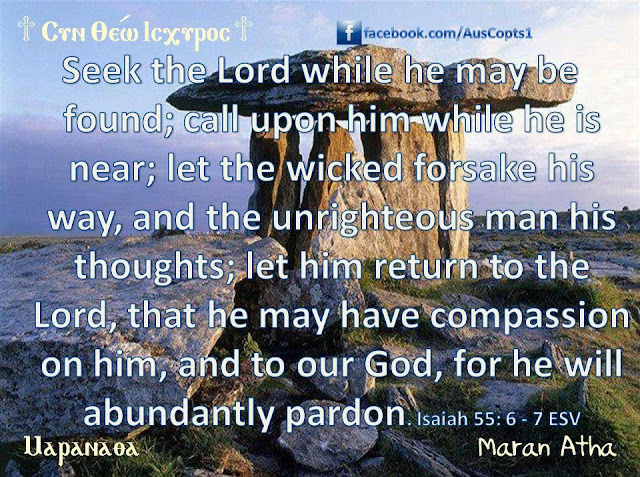 Seek the Lord while he may be found; call upon him while he is near;
let the wicked forsake his way, and the unrighteous man his thoughts;
let him return to the Lord, that he may have compassion on him,
and to our God, for he will abundantly pardon.
Isaiah 55: 6 - 7 ESV

Posted by Unknown at 7:46 PM No comments: Links to this post