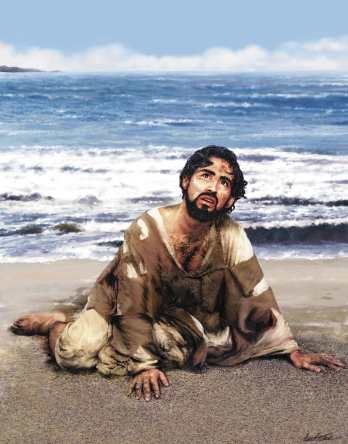 Posted by Unknown at 3:44 PM No comments: 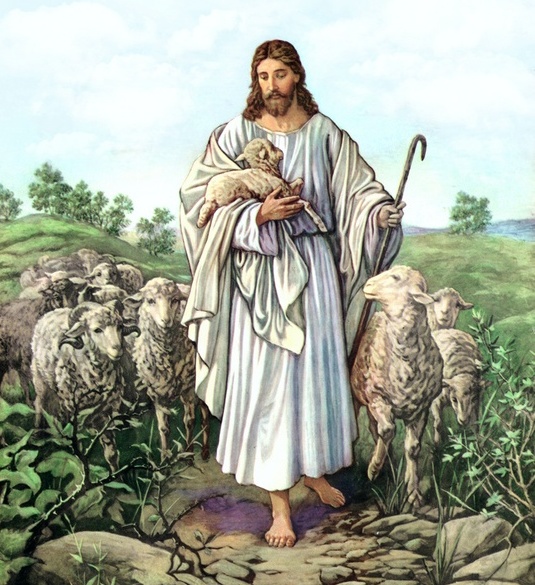 Posted by Unknown at 4:41 PM No comments:

Commemoration of Circumcision of The Lord Christ 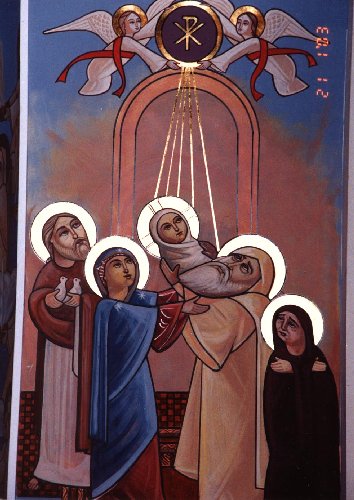 On this day, the church celebrates the commemoration of the circumcision of the Lord Christ, to Whom is the glory. God had ordained the law of circumcision as a sign that His people would become a particular people over all others. This was that every male of the seed of Abraham be circumcised on the eighth day of his birth. God put every soul that did not obey this law under judgment.

As our Lord Jesus was born from the posterity of Abraham, according to the flesh, He willed to be circumcised on the eighth day, to fulfill the law of and to relieve us from the heavy burden of this commandment, as St. Paul says, "Now I say that Jesus Christ has become a servant to the circumcision for the truth of God, to confirm the promises made to the fathers." (Romans 15:8)

He also gave us the sign of the new covenant through baptism, as St. Paul says, "In Him you were also circumcised with the circumcision made without hands, by putting off the body of the sins of the flesh, by the circumcision of Christ, buried with Him in Baptism in which you also were raised with Him, through faith in the working of God, Who raised Him from the dead. And you, being dead in your trespasses and the uncircumcision of your flesh, He has made alive together with Him, having forgiven you all trespasses." (Colossians 2:11-13)

Therefore, He demands from us to keep the spiritual circumcision, that is to say the circumcision of the heart, so that we may live for Him in righteousness and in holiness, for He says, "Unless one is born of water and the Spirit, he cannot enter the Kingdom of God." (John 3:5)

Glory be to our God forever. Amen.

Posted by Unknown at 4:49 PM No comments:

Our first beginning and our last end 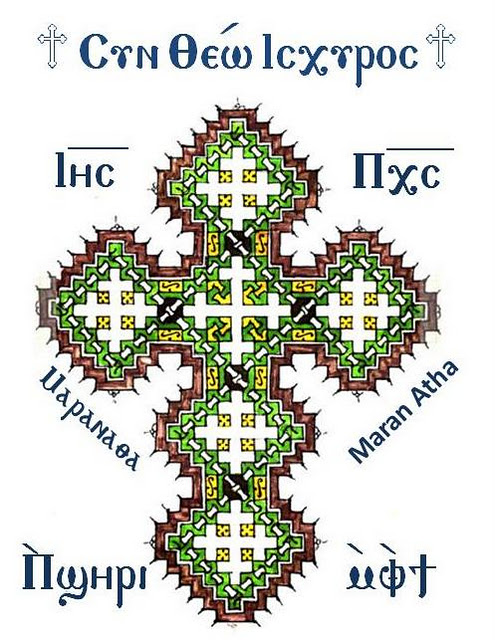 He is the truth, the absolute good, and the soul's goodness comes from that same source which has made it; the soul's perfecting in goodness comes from the conforming of its will to its nature, when it turns in love towards that good to which it owes its very existence - an existence which cannot be lost even if the will turns away from its creator.

This good is not far from any of us, for 'in him we live and move and have our being'. But we must cleave in love to it so that we may enjoy the presence of him from whom we have our being.

The apostle says we walk by faith as yet, and not by sight. But unless we already love him, we shall never see him. How can we love what we do not know?  To know God is to perceive him with the assured grasp of the mind, and to see and apprehend him is given to the pure in heart. Our hearts however cannot be made pure to see him unless we love him in faith.

Faith, hope and charity are the virtues for whose building the whole scaffolding of Scripture is set up. The soul which believes what it does not yet see, hopes in and loves that which it believes - that is why we can love God if we believe, even before we know him.

DAILY READING WITH
St Augustine --- The Heart at Rest

Posted by Unknown at 4:33 PM No comments: 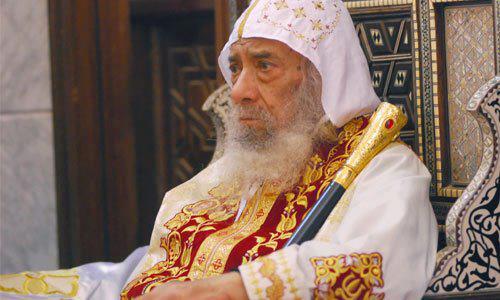 Look at the giants in the Kingdom of God, and earnestly desire to follow their road. Ask yourself every day: "What have I done for the Kingdom of God? Am I faithful in my service and in developing all the talents which God has given me? And have I responded to all those souls whom God wanted me to serve? And on the last day, shall I hear his tender voice saying to me: "Well done, good and faithful servant! you were faithful over a few things; I will make you ruler over many things. Enter into the joy of your lord!" (Matt. 25:21)

I always marvel at that clever servant who said to his master: "Master, your mina has earned ten minas". (Luke 19:16). This is the zeal that is real and fruitful in the Kingdom of God. In taking this as a standard for comparison, we might perhaps ask ourselves what we have done for our generation.

For that is what has been entrusted to us, and for which we are responsible before God and before the next generations! What practical use has our zeal been to save it?! Has it contributed to the saving of the church? Or have we taken a look and found our lives barren, worthless and unproductive?!

What have we done for a generation of widely spread permissiveness, materialism and abandoning of the faith; in which it has become a duty for all the children of God to be shining lights on a dark mountain?

Posted by Unknown at 8:03 AM No comments:

Cutting Off The Head Of John The Baptist 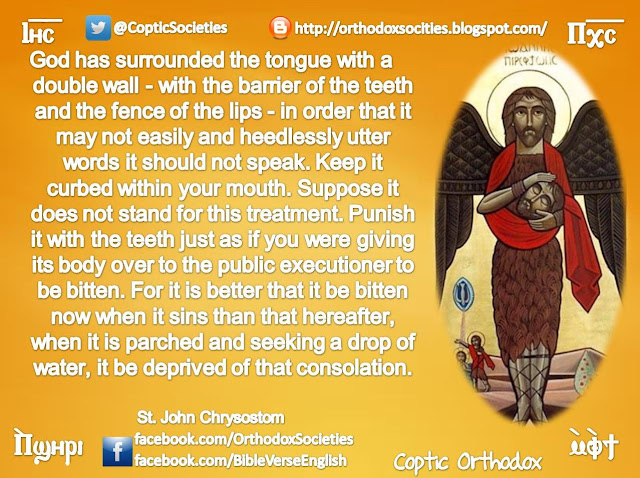 Give me here on a dish the head of John the Baptist, she said. The request was abominable, but she persuaded him, and he gave the order to curb John's holy tongue. But even up to now it speaks out, for each day, or rather in every church, you hear John crying aloud through the Gospels and saying: It is not lawful for thee to have the wife of thy brother Philip. He cut of the head but he did not cut off the voice; he curbed the tongue but he did not curb the accusation.

Hence, God has surrounded the tongue with a double wall - with the barrier of the teeth and the fence of the lips - in order that it may not easily and heedlessly utter words it should not speak. Keep it curbed within your mouth. Suppose it does not stand for this treatment. Punish it with the teeth just as if you were giving its body over to the public executioner to be bitten. For it is better that it be bitten now when it sins than that hereafter, when it is parched and seeking a drop of water, it be deprived of that consolation.

From the writings of St. John Chrysostom


The Martyrdom of St. John the Baptist - Synaxarium
http://coptorthodox.blogspot.com/2015/09/the-martyrdom-of-st-john-baptist.html

Posted by Coptic Societies at 4:17 PM No comments:

St. Mary The Model of Virgins 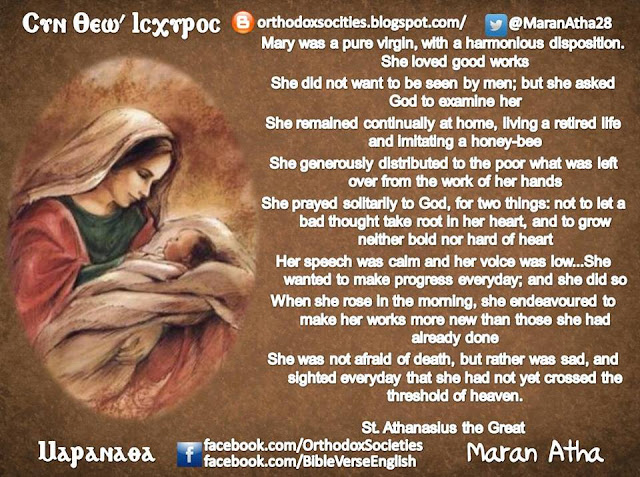 Mary was a pure virgin, with a harmonious disposition. She loved good works...

She did not want to be seen by men; but she asked God to examine her...

She remained continually at home, living a retired life and imitating a honey-bee...

She generously distributed to the poor what was left over from the work of her hands....

She prayed solitarily to God, for two things: not to let a bad thought take root in her heart, and to grow neither bold nor hard of heart.....

Her speech was calm and her voice was low...

She wanted to make progress everyday; and she did so.

When she rose in the morning, she endeavoured to make her works more new than those she had already done....

She was not afraid of death, but rather was sad, and sighted everyday that she had not yet crossed the threshold of heaven.

Posted by Unknown at 4:18 PM No comments: 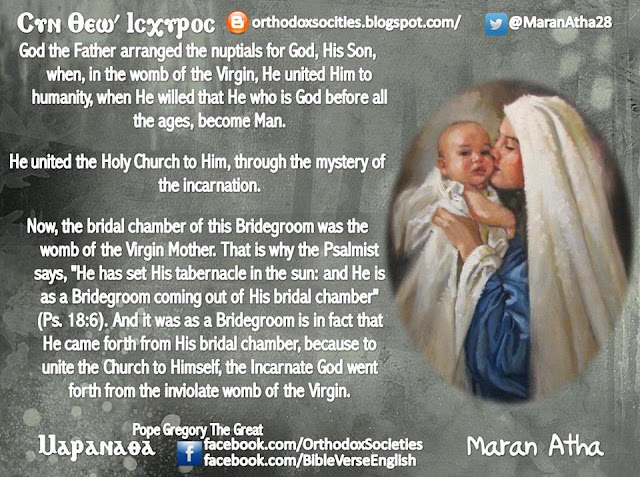 God the Father arranged the nuptials for God, His Son, when, in the womb of the Virgin, He united Him to humanity, when He willed that He who is God before all the ages, become Man.

He united the Holy Church to Him, through the mystery of the incarnation.

Posted by Unknown at 4:06 PM No comments: 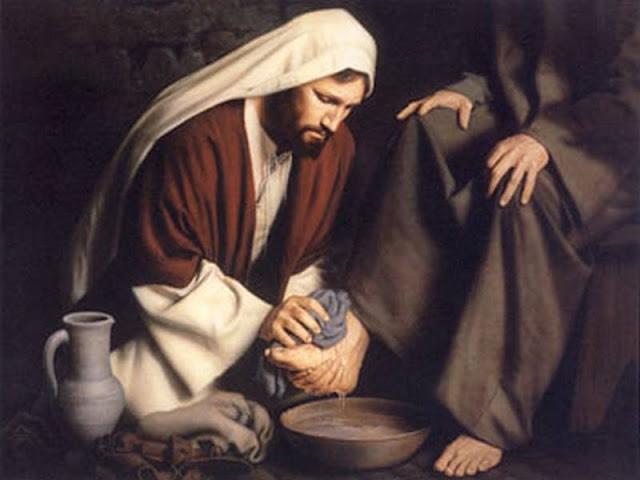 But if any one wishes to know why the grace is given by water and not by a different element, let him take up the Divine Scriptures and he shall learn. For water is a grand thing, and the noblest of the four visible elements of the world.

Where a covenant is made with any, there is water also. After the flood, a covenant was made with Noah: a covenant for Israel from Mount Sinai, but with water, and scarlet wool and hyssop.

Elias is taken up, but not apart from water: for first he crosses the Jordan, then in a chariot mounts the heaven. The high-priest is first washed, then offers incense; for Aaron first washed, then was made high-priest: for how could one who had not yet been purified by water pray for the rest? Also as a symbol of Baptism there was a laver set apart within the Tabernacle.

Posted by Unknown at 5:48 PM No comments: