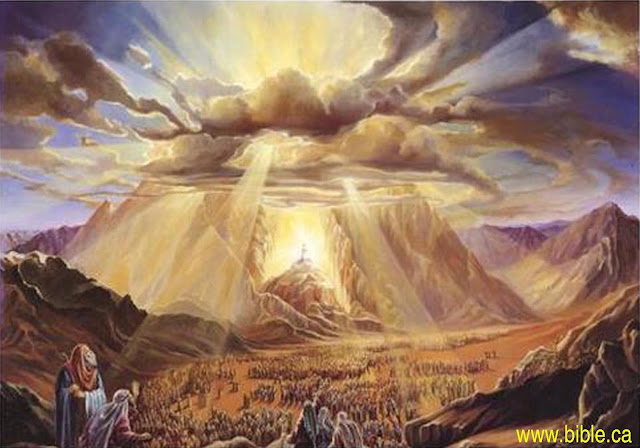 "Then Moses said to the Lord, “O my Lord, I am not eloquent, neither before nor since You have spoken to Your servant; but I am slow of speech and slow of tongue.”
So the Lord said to him, “Who has made man’s mouth? Or who makes the mute, the deaf, the seeing, or the blind? Have not I, the Lord?"
(Exodus 4:10-11)

It is easy to become nervous, tense, and anxious when we feel that our tasks are too big for us.  The truth is we all get the Moses syndrome from time to time and deny our ability to overcome the challenges that lie ahead.  Our problem is not so much in underestimating ourselves as it is in underestimating God.  By simply relying on God to equip us for the work He has given us, we can take the razor edge off stress.

Posted by Unknown at 4:14 PM No comments: 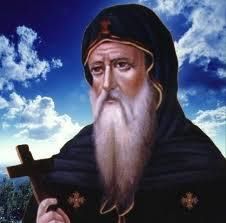 When the holy Abba Anthony lived in the desert, he was beset by accidie, and attacked by many sinful thoughts. He said to God, 'Lord, I want to be saved, but these thoughts will not leave me alone. What shall I do in my affliction? How can I be saved?'

A short while afterwards, when he got up to go out, Anthony saw someone like himself sitting at his work, getting up from his work to pray, then sitting down and plaiting a rope, then getting up again to prayer.

It was an angel of the Lord sent to correct and reassure him.  He heard the angel saying to him, 'Do this and you will be saved.'  At these words, Anthony was filled with  joy and courage.  He did this, and he was saved.

Posted by Unknown at 3:42 PM No comments:

Believe and then you will know 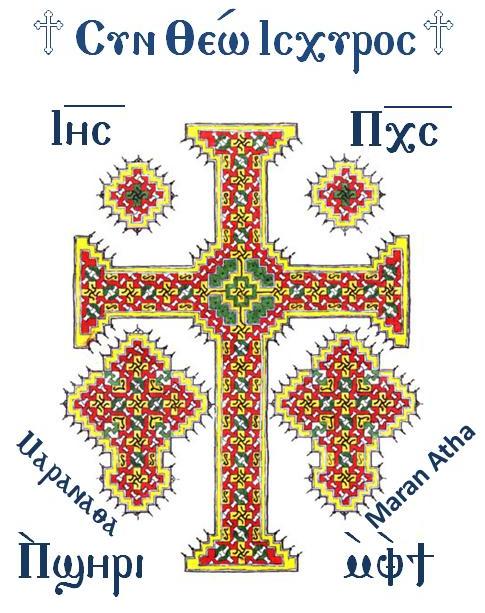 We believe, not because we know but so that we may come to know.  For what we shall know no eye has seen, no ear heard, nor has man's heart imagined.  Faith is to believe what we do not yet see; truth to see what we have believed.  To follow after God is to long for happiness, to reach Him is that happiness itself.

If we have reached the pathway of faith let us keep to it unswervingly, so that our hearts may become able to know those things which at present we do not understand.

Bring the light of reason to bear on what you now believe firmly by faith.

Could God hate in us that by which he has distinguished us from the beasts? Of course not: we could not in any case believe, if we had not reasonable souls.

There are some things belonging to our salvation which we as yet cannot understand, though one day we shall.  In these matters faith should go ahead of reason, purifying the heart and making it able to receive the great light of reason.

The prophet said, unless you believe you shall not understand; thus we may see that it is reasonable for faith to go before.  If we are persuaded of this, it is by the small amount of reason which goes before faith.

St. Bishoy The Star of The Wilderness 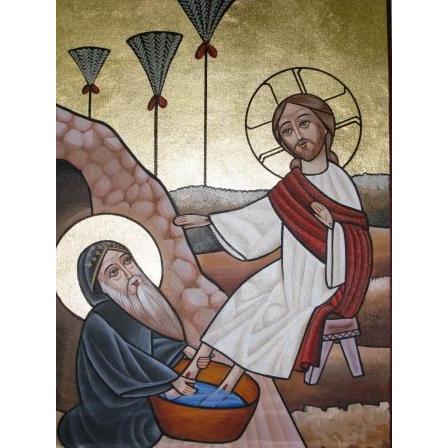 On this day, St. Bishoy, whose memorial is honorable, the star of the desert, departed. He was born in a town called Shansa in Egypt, and he had six brothers. His mother saw an angel in a vision saying to her, "The Lord says to you, give Me one of your children to serve Me." She answered, "Lord, take whoever you want." The angel took the hand of Anba Bishoy, who was thin and his body was frail. His mother told the angel, "My Lord, take one who is strong to serve the Lord." "This is whom the Lord has chosen," answered the Angel.

Later on, St. Bishoy went to the wilderness of Shiheet and became a monk by the hand of Anba Bemwah (Bamouyah), who also ordained St. John "Yehness" the Short a monk. St. Bishoy struggled in much asceticism and many worships that made him worthy to see the Lord Christ.

Emperor Constantine appeared to him in a vision, saying, "Had I known how great is the honor of monks, I would have abandoned my kingdom and became a monk." St. Bishoy told him, "You have banished the heathen worship and exalted Christianity, and has not Christ given you anything?" Emperor Constantine answered him, "The Lord has given me many gifts, but none of them is like the honor of the monks."

During his days, an ascetic old man appeared in the mountain of Ansena, who was reputed for his righteousness and to whom many people gathered. But he deviated from the true faith and the devil lead him astray. He taught that there is no Holy Spirit, and many were deceived by his sayings. Anba Bishoy heard about him, and he went to him and he had with him a weaved basket with three ears.

When he visited the old man and his followers, they asked him about the reason for making three ears for the basket. He answered, "I have a Trinity, and everything I do, is like the Trinity." They said to him, "Then, Is there a thing called the Holy Spirit?" Then he started to explain to them from the Holy Scriptures, from the Old and New Testaments. He indicated to them that the Holy Spirit is One of the three Persons of the Trinity. He convinced them, and they returned to the true faith. Then he returned to his monastery in the wilderness of Scete (Shiheet).

When the barbarians invaded the wilderness, he left it and dwelt on Mount Ansena, where he departed. After the time of persecution had ended, they brought his body with the body of St. Paul of Tamouh to his monastery in the wilderness of Shiheet.

Posted by Unknown at 5:13 PM No comments: 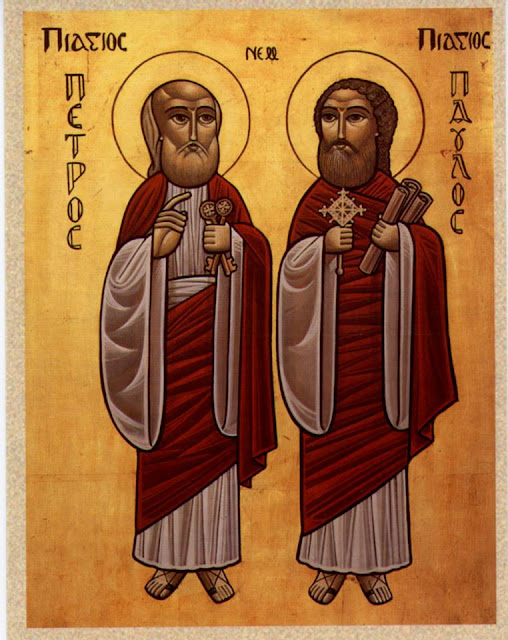 And they overcame him by the blood of the Lamb and
by the word of their testimony, and they
did not love their lives to the death.
(Rev. 12: 11)

Peter and Paul, trampled the power of Satan,
and restored the nations, to the faith of the Trinity.

Peter and our teacher Paul, with great struggle,
were in the stadium, of the apostles.

Our father Peter completed, his struggle
with death on the cross, in the great city of
Rome, for the name of Jesus Christ.

Paul also likewise, was beheaded in that place,
by Emperor Nero, all in one day.

They received glory form Christ, the King
and they rested with Him, in His eternal
kingdom, in the everlasting life.

Posted by Unknown at 4:15 PM No comments: