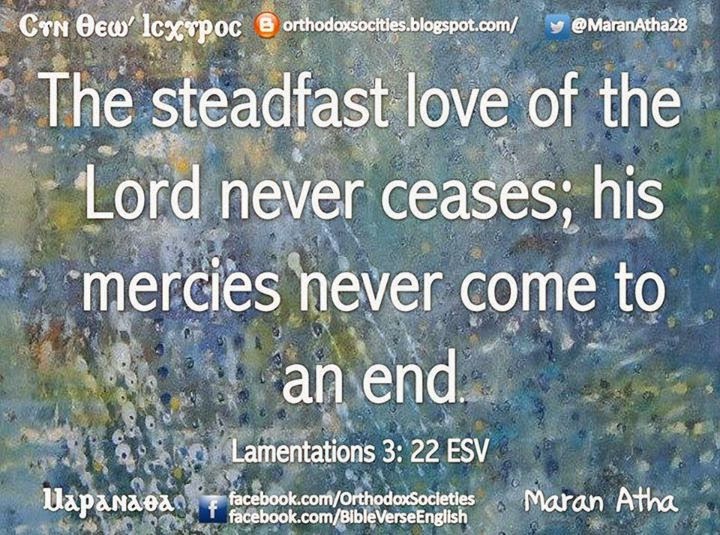 The steadfast love of the Lord never ceases;
his mercies never come to an end.
Lamentations 3:22

Many of us have difficulty accepting that God is as generous as He is. When we repeat a failure, we have a tendency to say, "This is it. God is finished with me this time." Actually God is never finished with any of his children. You see, there is not a loophole in God's mercy.

The problem is that we take the feelings that we would have if someone wronged us and apply them to the way we wrong God.  We say, "I would be finished with anyone who did that to me, so God must be finished with me." We take the feelings we have and project them onto God. Nothing could be farther from the truth. God will discipline us if we sin, because he wants us to mature. But he never "drops" us. So we can relax and enjoy God's endless mercies and thank Him for His discipline. God isn't finished with us yet.

Posted by Unknown at 5:35 PM No comments:

The Assumption of The Most Holy Virgin Mary 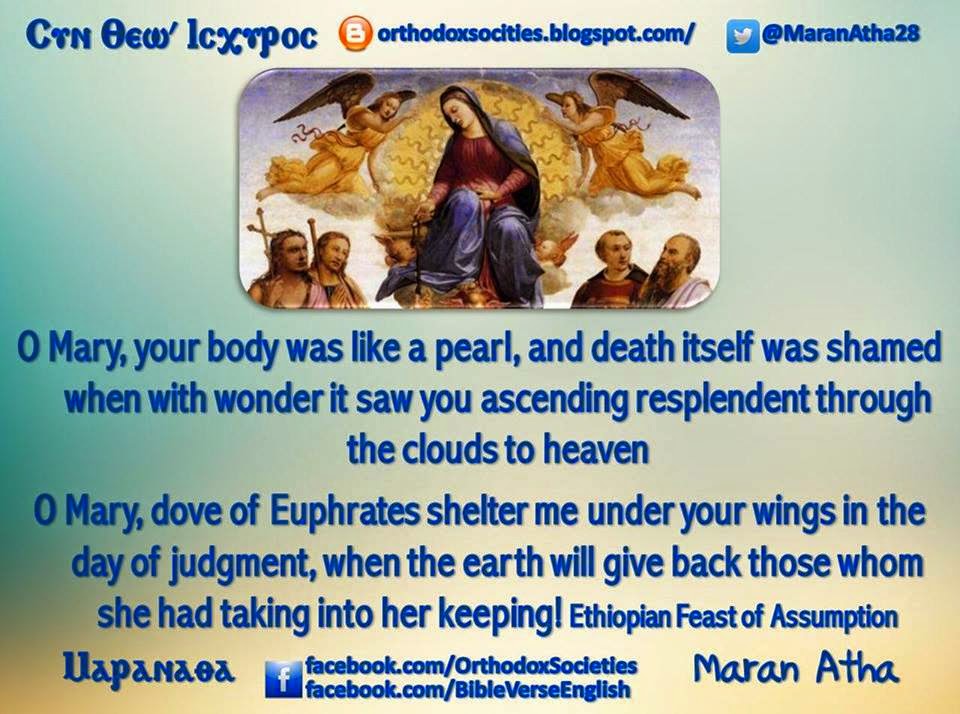 After the death of her Son, Jesus Christ St. Mary lived under the care of St. John according to her Son’s commandment. She witnessed the “New life in Jesus Christ” and helped the Disciples and Apostles by her love and prayers.

When she was about 60 years old on the 20th of Tobi, St. Mary, the Disciples and the Virgins of the Mount of Olives were all gathered and the Lord Jesus appeared and greeted them. He told them that he would return back the next day and receive his mother’s soul.

On the 21st of Tobi the Lord returned in the chariot of the Cherubim, accompanied with thousands of angels and David the sweet Singer. The assembled men and women wept, and St. Mary also wept, but the Lord consoled them. He kissed her and blessed them and bade St. Peter to look upon the altar for heavenly garments, which the Father had sent to shroud St. Mary in.  She turned to the east and prayed in a heavenly language and then lay down, still facing eastward.  The virgins stood about St. Mary singing, and Jesus sat by her. David the Singer rejoiced and said “Right dear in the sight of the Lord is the death of His saints”.

At the ninth hour the Lord received her soul, shrouded her body in the heavenly garments and they were fastened thereto. He bade the Apostles to take up the body; Peter bearing the head and John the feet, and carry her to a new tomb in the field of Jehoshaphat....

At the Field of Jehoshaphat
The Coptic text says “When we came to the field of Jehoshaphat, the Jews heard the singing and came out intending to burn the body”. The Apostles set down the bier and fled. Darkness came on the Jews and they were blinded and smitten by their own fire. They cried out for mercy and were healed and many were converted.

Ruben and the Bier
Our Synaxarium relates that a Jewish man, called Ruben, tried to upset the bier, but his hands withered to the elbow, He began to weep, asking the Apostles to pray for him that he might be saved and become a Christian. They knelt and prayed, and his hands were loosened and he was healed. He was baptized at once, and began to preach.

This feast commemorates the entrance of St. Mary’s body into heaven, as she preceded us and sat at the right hand of her Bridegroom and Son. It bears a powerful witness to the eschatological truth of our faith, i.e. “the world to come”.

❖ In accord with what has been written, ‘You are beautiful’ (Cant. 2:13), and your virginal body is wholly saintly, wholly chaste, wholly the dwelling place of God; with the result that thereafter it is wholly free from dissolution into dust... It was impossible that the vessel which had received God, the temple of the Only-Begotten Son, should be held fast by death....
Fr. Germanus of Constantinople

❖  Today the celestial spirits bring to heaven the Abode of the Holy Spirit, making her enter into the heavenly Jerusalem, to the immaculate Tabernacle, to us inaccessible, close to the Holy Trinity.

❖  Today the heavenly spirits have carried to heaven the holy body of the Virgin Theotokos, placing it among the angels to share in the unspeakable delights...

❖  Having lived in this body all-holy life, you are brought by the divine will to the Kingdom of your Son, our God; pray for us . . .
Armenian Liturgical Hymns on the assumption

❖  I salute the Assumption of the body which the human heart can never conceive . . .

❖  O Mary,  your body was like a pearl, and death itself was shamed when with wonder it saw you ascending resplendent through the clouds to heaven . . .

❖  O Mary, dove of Euphrates shelter me under your wings in the day of judgment, when the earth will give back those whom she had taking into her keeping!
Ethiopian Feast of Assumption

The Lord did not permit that the body in which He Himself had dwelt and from which He had formed His own humanity become a prey to corruption and dissolution.  St. Mary as a human being her body died; but ascended to heaven.  “The assumption according to the narrative of Joseph the Arimathea” (According to Synaxarium), states that Thomas the Apostle was absent in India when St. Mary felt asleep and passed away. On his return he asked about her and was told what happened.

St. Thomas pretended not to believe until he sees the body in the grave. At the grave he told the Disciples that the body is not in the tomb. As they rolled the stone there was no body, they did not know how to explain it, being vanquished by St. Thomas’ words. Then St. Thomas told them how he saw her body assuming to heaven, and St. Mary gave him her girdle, and show it to them.

They all rejoiced and asked the Lord to see her again.

In the seventh month after her death (i.e., on 15th of Mesra), the Disciples reassembled at the tomb and spent the night watching and singing hymns.

At dawn on the 16th of Mesra there were great thundering and a choir of angels were heard. The Lord Jesus came on the Cherubim with the soul of the Virgin Mary seated in His Bosom and greeted them.

Other stories state that till the 16th of Mesra her body was not ascended. The Lord came with the soul of His mother and asked the body to accompany Him. He took her into the chariot. The angels went before them, and a voice called “Peace to you, my brethren”.

Posted by Unknown at 5:56 PM No comments:

Mary Blessed Are You Among Women 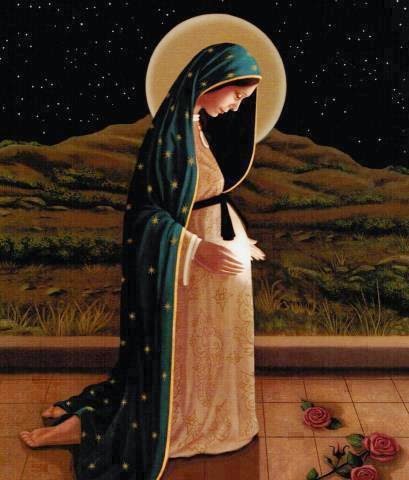 In the following words St. Mary teaches us how worthless she felt of herself and that she received by the heavenly grace that was lavished on her every sort of good merit that she had. She says, "For He has considered the humility of his handmaid.  For behold from this time on all generations will call me blessed."

She demonstrates that in her own judgment she was indeed Christ's humble handmaid, but with respect to heavenly grace she pronounces herself all at once lifted up and glorified to such a degree that rightly her pre-eminent blessedness would be marvelled at by the voices of all nations.

Posted by Unknown at 5:35 PM No comments:

Surrender Yourself Completely To Him 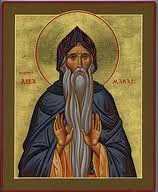 How is it possible that in the face of so many exhortations and promises, we still refuse to accept totally to go to him and surrender ourselves completely to him? How can we refuse, as the Gospel says, to deny all other things, even our own soul (Luke 14:26), and to seek him alone with our love and give it to nothing else?

But, look, all these things and such glory given! Look at all the loving dispositions of God manifested in the times of the fathers and the prophets! What promises! And what exhortations! What great mercy of the Lord has been shown us from the very beginning! Finally, in his own coming on this earth he has shown to us an ineffable kindness through his crucifixion in order to convert us and bring us into life. And yet, we do not will to give up our love for the world nor our evil tendencies and habits.

In this way we show ourselves persons of little or absolutely no good faith. And in spite of all this, he still shows himself kind to us. He protects and cherishes us invisibly, not turning us over (according to our sinful deserts) to the deceits of evil and the world. He, in his great compassion and long-suffering, watches from above, waiting for the time we shall return to him.

Posted by Unknown at 7:55 PM No comments: