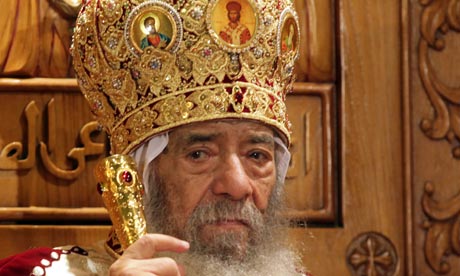 Pope Shenouda III. In 1981 he was banished to a desert monastery by the Egyptian president Anwar Sadat.
Photograph: Khaled Elfiqi/EPA

Pope Shenouda III of Alexandria, who has died aged 88 after suffering from prostate cancer, was for four decades the spiritual leader of the Coptic Orthodox Church, the largest Christian community in the Middle East. In his native Egypt he was patriarch to 7 to 11 million Copts – the government of the predominantly Muslim country giving a lower estimate than the church's – and another 4 million worldwide.

Coptic congregants, worshipping in a tradition that goes back to the earliest days of Christianity, held "Baba Shenouda" in high regard. Yet his pontifical reign was marked by controversy. While inter-communal strife saw thousands of Copts leave Egypt, critics blamed him for politicising his office and exacerbating matters, either through over-assertiveness or timidity. Egypt's 2011 uprising threw such tensions into starker relief.

Ten years into his papacy, Shenouda had famously fallen out with President Anwar Sadat; in September 1981 he was summarily dethroned and banished to an ancient desert monastery. Reinstated by Sadat's successor, Hosni Mubarak, in January 1985, the Coptic pope, 117th in a line of leaders that began with St Mark, achieved considerable successes. The ordination of deaconesses was resumed after an interval of several centuries, and he brought women into theological colleges and communal councils, though he was against them becoming priests.

Beyond his devotional authority, Shenouda also represented Coptic lay and political interests in Egypt and fostered ties with wealthier Coptic diasporas in the US, Canada, Europe, South Africa and Australia. From 1965 and throughout his papacy he edited the Coptic journal El Keraza.

However, he was beset by problems in his final years. Once he had proclaimed: "A church without youth is a church without a future"; now young Copts resented the way he spoke on their behalf. Shenouda began sacking dissenters with alarming frequency and secularists said he encouraged a dangerous culture of church-centred isolationism.

Past troubles came back to haunt him, too. In 1976 he dismissed a rebellious deacon, Max Michel, who in 2005 was declared a bishop by an Orthodox organisation in Nebraska, and the following year crowned himself Archbishop Maximus I, head of a rival St Athanasius church. Michel claimed that God had deserted Shenouda's congregation and that more than a million Copts had become Muslims or evangelical Christians. While Michel attracted little support, he caused much rancour.

Also in 1976, Shenouda severed relations with a sister church in Ethiopia after the Marxist regime arrested and then executed the Orthodox patriarch.

Shenouda developed a personal respect for and close working relationship with Mubarak, to whose government he and his bishops had privileged access. Initially he discouraged Copts from taking part in the demonstrations that led to Mubarak's overthrow in February 2011. The year of revolution posed new questions of identity, security and political involvement for a section of society that had always felt discriminated against. Faced with January 2012's elections to a parliament dominated by the Muslim Brotherhood and conservative Islamists, many Copts suppmore effective orted the liberal, secular Muslim-Christian Egyptian Bloc, which achieved fourth place. Others formed specifically Coptic parties, a development that Shenouda had resisted.

He was born Nazir Gayed, the youngest of eight children in Asyut, southern Egypt, moved to Cairo at 16 and served as a novice at St Anthony's church school. In 1947, he gained a BA in history from Cairo University, fought as an officer in the Arab-Israeli war the following year and then taught English in a high school. In 1949, he graduated from the Coptic Orthodox Theological Seminary. Four years later, he began teaching at the Monastic School in Helwan and became professor of Old Testament studies. All the while he dabbled in classics and archaeology; he wrote poetry and penned newspaper opinion pieces, many on Coptic history.

The name Copt, from the Greek for "Egyptian", now denotes indigenous Orthodox believers who make up 95% of Egyptian Christians. They maintain that the apostle Mark founded the Church of Alexandria around AD55. After an ecumenical ruling in 451, other Christians ostracised them for believing in the single nature of Christ – divine and human seen as one – a charge that Copts rejected. Arabs conquered Egypt two centuries later, although Copts remained a majority until the 12th century, when many converted to Islam. Shielded from Europe, Copts developed distinctive customs such as fasting, monasticism and the usage of liturgical Coptic, derived from the Pharaonic language of ancient Egypt.

Gayed entered the El Suryan (St Mary) monastery in Egypt's remote western desert in July 1954. From 1956 to 1962, he lived in a cave and experienced "complete freedom and clarification". His teacher was the charismatic Father Matta el-Meskin (Matthew the Poor), later to become an opponent. Sadat offered Matta the papacy in place of Shenouda in 1981.
Recalled from the hermit's life, Gayed became dean of the Coptic Seminary and bishop for religious education with the saintly name of Shenouda. Within seven years, enrolment of part-time students had grown tenfold.

Shenouda was appointed personal secretary to the newly elected Pope Kyrillos VI in 1959, though briefly suspended in 1966 for radically demanding the popular election of bishops. When Kyrillos died in March 1971 he was named as a possible successor. Ritually chosen by a blindfolded boy drawing lots from among three candidates elected by church bodies, in November 1971 Gayed was enthroned as His Holiness Shenouda III, Pope of Alexandria and Patriarch of All Africa.

More ebullient than his predecessor, Shenouda inspired the growth of churches outside Egypt – from seven in 1971 to more than 150 three decades later. The number of bishops in the Holy Synod increased from 20 to 83; four bishops were ordained in Britain, where 30,000 Egyptian Copts live.

But life beyond the cloisters proved more perilous. Having long opposed demands to impose Islamic sharia law on Egypt, he befriended Sadat, who had been Egypt's president from 1970, and endorsed his peace initiative with Israel. But Sadat later damned Shenouda as a secessionist after Christians fought Muslims in Cairo and expatriate Copts barracked Sadat during an American visit. In September 1981, Sadat arrested Shenouda along with 1,500 other "opposition figures" including journalists and unionists, Muslim Brothers and Coptic clerics. He replaced the pope with a panel of five bishops and banished him to Wadi Natrun. A month later, Sadat was assassinated.

Eventually Mubarak recalled Shenouda to the papal seat after intercession by visiting clerics, including Graham Leonard, then Anglican bishop of London. Vowing to be a turbulent priest no more, Shenouda told a welcoming party of 10,000 at St Mark's Cathedral: "We Christians and Muslims are like organs in one body, which is Egypt."

Shenouda visited Pope Paul VI in Rome in 1973 and signed a declaration of common faith. This marked the first meeting between Alexandrine and Roman pontiffs since 451. In 1989 he signed a similar concordat with his Orthodox brothers, and in 2000 he welcomed Pope John Paul II to Egypt. Shenouda also defended smaller, beleaguered Christian communities throughout the Middle East.

Yet his liberalism had its limits. He said Anglican priests who converted to Catholicism had "left one error to embrace another that is worse". Cairo's Al-Ahram newspaper chided his "politically motivated" 1979 edict forbidding Egyptian Christians from visiting co-religionists in Jerusalem. His comments on Jews often sailed close to crass antisemitism and he rebuffed calls to soften Coptic strictures on divorce.

With his voluminous beard, grand turban and ornate oriental crucifix, Shenouda's public persona could appear solemn. Then he would suddenly break into laughter, living up to his reputation as a great teller of jokes.

Like John Paul II, the Egyptian pope seemed too innovative to some, too conservative to others. Many disliked his mild response to allegations of forced conversions of Christian girls, and to recurrent sectarian violence. Extremists killed 10 in a church in 1997; 20 more were murdered after new year 2000.

He did criticise lenient sentences and often asked why so few Copts sat in parliament. Yet he seldom challenged the government, preferring to work behind the scenes, and upset Muslims and Copts by endorsing Mubarak's candidacy for re-election as president in 2005. The liberal Muslim analyst Ahmad al-Aswani blamed the pope for "beard-kissing and forgetting" instead of confronting an "open season on Copts".

Shenouda's hundred books and countless sermons untangled abstruse dogma in a straightforward way. His more than 30 foreign visits included the first by a Coptic pope to the US, in 1977.

However, his health was failing, and in June 2008 he underwent surgery in Ohio. Internal Coptic disputes went public and Shenouda seemed to lose his celebrated grip over his community.

On 1 January last year, 23 people were killed outside a Coptic church in Alexandria. When Egypt's revolution began later that month, the sight of Christians chanting alongside Muslims in Tahrir Square, Qur'ans and crosses held aloft, momentarily dispelled fears of sectarian carnage. But order broke down after Mubarak's forced departure and 12 died as extremists attacked churches in Cairo's poor Imbaba district in May. When thousands of Copts took to the streets in October to protest against the state's recent demolition of an "unlicensed" church in Aswan, the resulting military crackdown left 27 people dead.

Shenouda hailed the victims as martyrs, "beloved children whose blood does not come cheap". Yet he faced defiance from the Maspero Youth Union, Copts who condemned the governing SCAF, the Supreme Council of the Allied Forces. There was therefore urgency in Shenouda's call for national unity at a Christmas service in St Mark's at the beginning of January this year: "For the first time the cathedral … is packed with all types of Islamist leaders in Egypt. They all agree ... on the stability of this country, and to work with the Copts as one hand for the sake of Egypt."

This month's visit by Muslim Brotherhood leaders to Shenouda echoed that sentiment, as did the Maspero Youth's slogan at cathedral prayers for the ailing pope: "Your people love you."